The Six Flags of Texas

I wrote about my event because I had lived in Texas for almost 11 years, and I have been to Six Flags Amusement Park, and I just learned last year about the Six Flags that Texas once had.  Since this project is about perspective, I wondered what Texas’s perspective was like during the time.
After the Revolutionary War, and about half a century later, the colonists had come to Texas exploring the rest of America.  What they found was Occupied Territory, and they were not in the mood to get in a new American War. Spain had re-claimed Texas from France, and Mexico was upcoming.  Mexico held Texas for 15 years, until finally the colonists... the true Americans, could come and take over the land... but not to join America, to become a republican country.  Once the Civil War came along, the South... the Confederate States, wanted the people of Texas to join them, especially since Texas did agree slavery was necessary. After the Union won, Texas was put into American place along with the other states.
The Proximate Cause of this event... the reason of the Six Flags existence... is all the flags that ever took control... wanted the greatly sized land for its fertile and smooth biome.  Texas is just about as big as the entire country of Spain or France, then Mexico is just next door.
The history of Texas in the time of the Civil war has so many transitions, the Six Flags of Texas represents the six transitions that Texas passed through... control of the boot-shaped land was held by many.  Native tribes were the very first to set foot on Texas biome, since the time of the Ice Age, the land bridge from Russia to Alaska gave them that ability. And for about 9,000 years, they were under control. Second to come... Spain- at the time of “The Discovery of America” at just about 1500.  Third up, France came along, but they only held if for 5 years before Spain reclaimed it. Mexico came along next and took it for about 15 years. It was after when Texas decided that they should become their own place, the “Republic of Texas” was formed, but it only was existent for about 10 years.  Then, it joined the Confederate States for the Civil War from 1861-1865. Finally, after the Union won, Texas joined the United States of America. Since the Natives didn’t technically have a flag, Spain, France, Mexico, the Republic of Texas, the Confederate States, and the U.S.A. are the Six Flags Texas has lived under.
Texas is one out of 50, but it has an important part in the country, all states contribute to each other, and the second biggest landmass definitely has a lot to give, it’s the Santa Claus of the U.S.  If the Confederacy won the war, then the warm, massive Texan plains, along with the other Southern states would be kept, and the rather cooler land would be left to the North; less efficient for growing crops.
I’m not sure what Texas would be like if the Confederacy won the war, or if there weren’t as many people to invade it.  I know what all the invasive countries are like, except the republic of Texas. Texas doesn’t seem like Spain, France, Mexico, or the Confederacy, I wonder if it got its personality from the Republic of Texas.

Greater than the Sum of its Parts 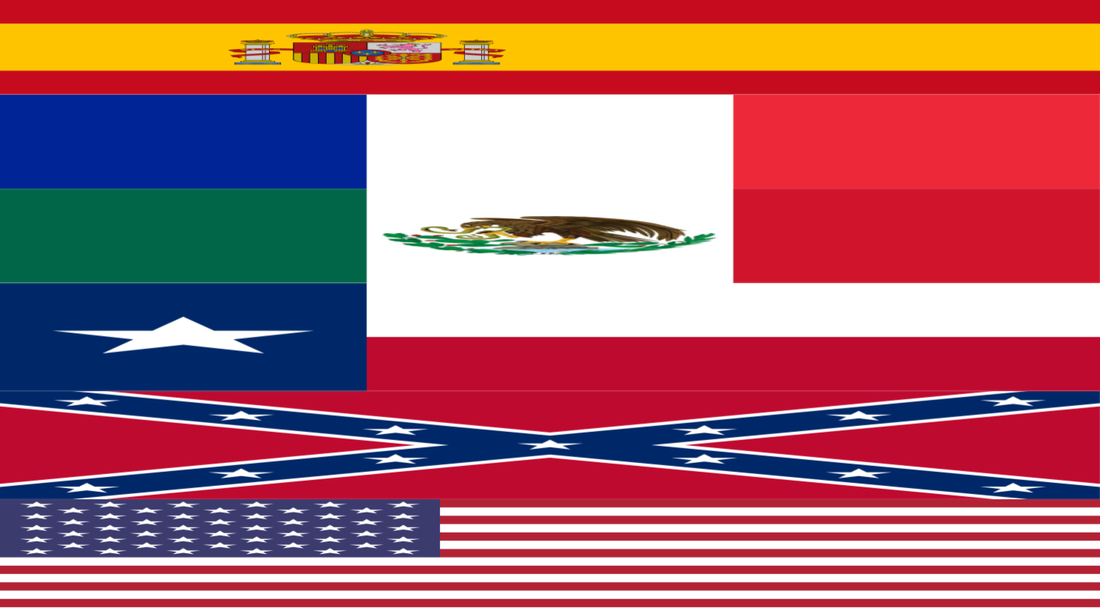 The Truth of War... it is always an event that people use to try and gain power, or for the other side; to defend their power.  War can be defined through many peoples' actions; like greed, grief, or confidence.  There