The Snowman (The Shoveler)
What is climate change and how is it different from global warming?
Climate Change is first of all, real.  The climate change issue is based on the added effect we put onto the evolving climate that causes a lag in the natural adaptability of nature.  Climate change in a nutshell is a shift in the Earth climate regarding temperature and humidity.  It is different from global warming in the sense that global warming is simply the "heating of Earth".  Climate change causes organisms that are health-jeopardized to either relocate, adapt, or die, and we add more poison to the air every day.
Why should we care about climate change, now, when it's been happening naturally since the Earth began?
We should be in regard of climate change now especially due to the overload of carbon emissions by humans.  Climate change is natural, as it has been happening for 4 and a half billion years, but now billions of tons of vaporized carbon and other greenhouse gases have been sent into the atmosphere by humans, causing the path of climate change to go exponential.
How does your project demonstrate your understanding of climate change?
Our project is a valuable demonstration toward climate change because of our story-line based off the snowfall frequency in Durango for the past decade, causing our main character to become homeless.
What was your largest area of growth during this project?
My largest area of growth within this project was my lack of taking advantage of my digital skills to edit the video, I focused more on the other parts of the process, and didn't utilize my best skill.
What was your greatest strength during this project?
My greatest strength within this project was my ability to use acting within the film, and good story-writing skills to assist the screenwriting process of the film. 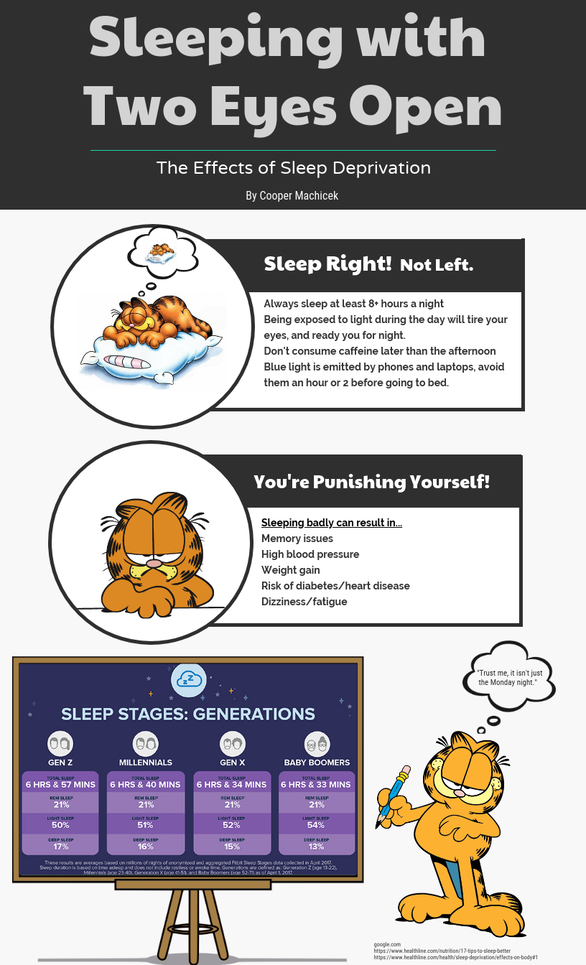 In this project, we created info-graphics based off problems that affect the brain and body.  I did mine over sleep deprivation, something people do not at all handle well. I appreciate this project because it allows us to create a positive influence on many, and show evidence to persuade people to make good decisions.  This project I’m sure was appreciated by others in the sense that they could agree, and they can influence their friends, family, and even each other.

Reflection
My biggest challenge during this project was choosing a topic.  It’s pretty clear that there are uncountable problems with the world, but choosing a very critical one is important, because viewers will see that you want to address big issues.  Sleep- something that people spend half their life doing, or rather not enough time doing, is a big one!
My greatest success throughout this project was taking criticism and feedback, and applying it to the finished result.  Things like increase font size, center pictures, and even helping me remember to write my own name! I had a lot of success on my own though, spilling ideas and opinions, and adding connective pictures with them.
If I were to do this again, I would leave my old one as is.  I would do another one on a different topic, with a different layout, and different pictures and styles, then compare them.  I would then maybe try one more of the combined 2, and make it really intricate!